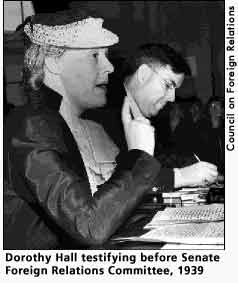 Dorothy Thompson, a prominent journalist, political commentator and a leading opponent of Hitler and 1930s fascism, was born July 9, 1893 in Lancaster, New York.  Her mother, Margaret, died in 1901 and her father, Peter, a Methodist pastor, remarried two years later.  Dorothy fought frequently with her stepmother, Elizabeth Abbott Thompson, and in 1908, Peter sent his daughter to live with relatives in Chicago. After graduating from Syracuse University in 1914, she worked for the women's suffrage movement until 1917 when she moved to New York and embarked on a career in journalism. Thompson went to Europe in 1920 where she established herself as a journalist. By 1925, she headed the Berlin bureau of the New York Post and the Public Ledger. However, her negative reporting on the rise of Adolph Hitler and the Nazis led to her expulsion from Germany in 1934. She returned to America where, beginning in 1936, her thrice-weekly column "On the Record" ran in the New York Herald Tribune and more than 150 other newspapers. "On the Record," plus a monthly column she wrote for the Ladies Home Journal and her work as a lecturer and NBC radio commentator made her the most syndicated woman journalist in the country as well as one of the most famous women in pre-World War II America–and along with Eleanor Roosevelt, one of the most influential. Her private life was equally celebrated, especially after she married Nobel Prize-winning novelist Sinclair Lewis in 1928. The marriage ended in 1942.

America's entry into World War II deprived Thompson of her crusade against the Nazis and fascism and her intuitive, emotional style and penchant for viewing world events and leaders in black and white moral terms began to sound emotional and self-indulgent. Seeking a new issue and a new audience after the war, Thompson turned her attention to the Middle East. Although she had supported Zionism (the movement to establish a Jewish nation in Palestine) since 1920, she ultimately became anti-Zionist and pro-Arab. Her other political writings became more conservative; however, she supported nuclear disarmament and portrayed the Cold War as a cultural and ideological battle rather than as a military struggle. She died in Portugal in 1961.