Eleanor Roosevelt, John Kennedy and the Election of 1960 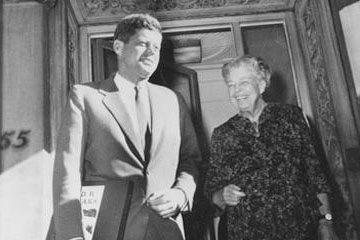 Eleanor Roosevelt did not initially support John Kennedy's quest for the presidency. Kennedy's victory at the 1960 Democratic convention did little to change her mind. Yet the candidate knew that her support was a key to his victory. The documents contained in this mini-edition recount the wariness with which they regarded one another and the steps they took to overcome this suspicion as they combined forces in the campaign's final days. The documentation of their rapprochement will interest those studying American politics, the Cold War, McCarthyism, civil rights and the role of media in presidential elections.

Aids to Reading the Documents

The staff of the Eleanor Roosevelt Papers designed this project — Eleanor Roosevelt, JFK and the Election of 1960 — for teachers and students as well as scholars. The introductory essays, the biographies and the annotation are written for this wide-ranging audience and we encourage students and teachers to download the documents for use in their classrooms and discussion groups. In fact, we so hoped that teachers would organize a lesson plan around the issues discussed in this mini-edition that we designed a model for them which may be accessed by visiting our Teaching Eleanor Roosevelt resources and downloading the Eleanor Roosevelt and John Kennedy Lesson Plan.

We especially welcome comments from teachers as to how we can improve this site and what additional material they would like to see on it. We also encourage students to evaluate the site as well.

We thank them for their assistance and continued support.