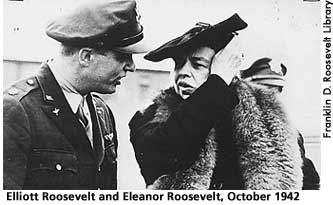 Elliott Roosevelt, the second son and third child of Eleanor and Franklin Roosevelt, had a varied career in communications, politics and business.

Named for her father and like him in many ways, Elliott was ER's favorite child and the one for whom she felt the most responsibility. She blamed herself for many of his difficulties–personal and professional–and throughout her life tried to help him however she could. However, ER's favoritism and Elliott's willingness to exploit the Roosevelt name for his own gain led to tensions among the other Roosevelt children and eventually to her own rupture with Elliott.

Elliott attended Groton but, unlike his brothers, refused to go to Harvard. Instead he embarked on a series of jobs before settling on a career in communications in the early 1930s. Elliott's flamboyance attracted media attention and when he became manager of the Hearst radio chain in 1933, the press alleged that he had obtained the job on the strength of his family name. ER deplored the publicity his appointment generated and her son's affiliation with strident New Deal critics in Texas. Elliott further distanced himself from his family when as a member of the Texas delegation at the 1940 Democratic National Convention he proposed to nominate Jessie Jones, the head of the Reconstruction Finance Corporation, for vice-president rather than support FDR's announced candidate, Henry Wallace. ER, who spoke at the convention, dissuaded him.

Elliott repaired his breach with his parents during World War II when he accompanied FDR as a military aide to the Casablanca meeting of 1943 and the Cairo-Teheran Conference of 1944. As an Army photo reconnaissance pilot, he and the men in his unit also played a key role in the D-Day landings.

After FDR's death in 1945, Elliott and his family moved to Top Cottage to be near ER and to enable her to live at Val-Kill as she wished. Mother and son also joined in a farming venture, Val-Kill Farms. The business was not profitable and Elliott eventually sold most of the farm property, which had been part of FDR's estate; however, he continued to live at Top Cottage until he sold the place in 1952. During this period, Elliott also served as his mother's agent, arranging the serialization of the second volume of her autobiography and developing both a television and a radio series that she hosted. Neither of these programs lasted long and the radio show in particular drew criticism over Elliott's willingness to use ER's name to endorse products advertised in the commercials.

Elliot's first book, As He Saw It (1946) was also controversial. Critics attacked the book, which was based on Elliott's experiences as FDR's wartime aide, as inaccurate because it portrayed the British and the Americans as allies against a largely guiltless Soviet Union in the postwar world. ER, who did not agree with Elliott's conclusions but nevertheless had written the book's dedication, defended the book and her son. She continued her support of Elliot by writing the introductions for four volumes of FDR's letters that subsequently he edited.

However, by 1952 the relationship between mother and son had frayed and Elliott left Hyde Park shortly after his brother, John, with whom he did not get along, moved into nearby Stone Cottage.

Thereafter Elliott was involved in several different activities. He raised Arabian horses in Portugal, served as mayor of Miami Beach between 1965 and 1969 and, with a collaborator, produced three non-fiction books about his parents' lives. He also wrote a series of mysteries in which ER was portrayed as an amateur detective.

Elliott married five times and fathered four children. He also adopted the four children of his last wife. He died of congestive heart failure in 1990.