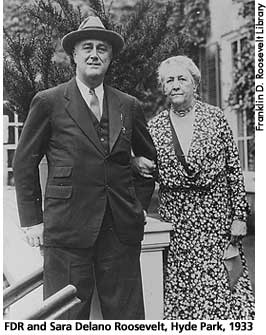 Sara Delano Roosevelt (SDR) was the daughter of Warren Delano, a wealthy merchant who made a fortune in the tea and opium trade in China, and after losing it, returned to make a second fortune. Sara grew up in Hong Kong from 1862-65 and in Algonac, the family estate on the Hudson River near Newburgh, New York. She was educated at home, except for a short period in 1867 when she attended a school for girls in Dresden, Germany. Sara Delano was tall and radiantly beautiful and had many suitors. At twenty-six, to the surprise of her friends, she married James Roosevelt, a widower who was twice her age. By all accounts, she found great happiness in her marriage and in life on her husband's Hyde Park, New York, estate. After the birth of Franklin Delano Roosevelt on January 30, 1882, she was advised to have no more children. She became absorbed in raising her only son, reading to him, giving him baths, and directing his activities herself rather than leaving these tasks to servants. After the death of her husband in 1900, she became still more single-mindedly focused on her son and his welfare. She moved temporarily to Boston when he attended Harvard in order to be near him. No mother could have been more devoted. She was also strong willed, controlling, opinionated, and inflexible. She does not seem to have been enthusiastic about any of the young women her son courted and, when he fell in love and proposed marriage to Eleanor Roosevelt, she tried to change his mind and insisted that the engagement be kept secret for a year.

After Franklin and Eleanor's marriage on March 17, 1905, SDR planned every facet of their lives. She built a double townhouse at 49 East 65th Street in Manhattan, one half for them, one half for herself. Later, she bought a cottage for them right next to her own on the island of Campobello where she spent her summers. When children began to arrive, she was there with advice on how to rear them and she often undermined parental discipline by spoiling them. The Delanos were a close and supportive family, unlike ER's mother's family, the Halls, and ER at first appreciated her mother-in-law's attention. She felt insecure about her role as a mother and relied on Sara's direction. She tried to please Sara and win her affection. But Sara was aloof and emotionally focused on her son, Franklin. ER soon found her mother-in-law's domination oppressive and struggled to achieve her independence. As she developed her own interests, friends, and activities, and in the 1920s emerged as a political leader in her own right, she was able to escape Sara's authority. At times FDR and ER became allies in opposing Sara's will. After polio paralyzed FDR's legs, Sara wanted FDR to retire to Hyde Park and live the rest of his life as a country gentleman, but ER strongly supported FDR's desire to return to politics. Sara hated politics, hated publicity, hated newspapermen, and was prejudiced against any individual or group not belonging to her elite social class. Ironically, the public lives of both her son and her daughter-in-law exposed her to much that she found distasteful. She retained her dignity, her pride in her family and lineage, and her strong opinions, however, and remained in charge of Springwood, the estate in Hyde Park that she had shared with her husband and then with FDR, until her death. FDR never created a home with ER that was separate from his mother's home and even after Sara's death FDR refused to make any changes in the way the house was furnished or decorated.

After Sara died on September 7, 1941, ER wrote in her column that Sara's "strongest trait was loyalty to her family....She was not just sweetness and light, for there was a streak of jealously and possessiveness in her when her own were concerned." ER recognized Sara's fierce strength, but she could not love her. "It is dreadful," she wrote a friend, "to have lived so close to someone for 36 years & feel no deep affection or sense of loss. It is hard on Franklin however."