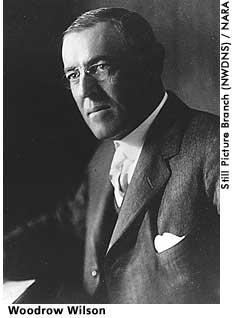 Woodrow Wilson served two full terms as president, from 1913 to 1921, and, although he is best remembered for the role that he played in constructing the Treaty of Versailles, he was first and foremost a dynamic politician with progressive ideas about domestic policy, liberal internationalism, and the role of the president in American public life.

Born on December 28, 1856, in Staunton, Virginia, Wilson graduated from Princeton University in 1879, and then from the University of Virginia Law School in 1880. Six years later, he was awarded a doctorate in political science from Johns Hopkins University, shortly after publishing his first book about some of the problems confronting modern democracy. In 1890, Wilson returned to Princeton as a member of its political science faculty, and served as president of that institution from 1902 to 1910. Abandoning academia for political life that same year, Wilson ran for the governorship of New Jersey -- and won -- yet he remained leery of the narrow interests inherent in state politics and kept his eye on the White House.

In 1912, Wilson won the Democratic nomination for president and coasted to victory in the general election on the back of a bitterly divided GOP. Almost immediately, the new president began governing the way he thought a president should govern: through use of the bully pulpit, by enforcing greater discipline on Capitol Hill, and by skillfully using the media to insure that the White House -- and not the Congress -- was responsible for setting the national agenda. Wilson used these tactics, among others, to secure passage of many of his "New Freedom" proposals, including tariff reform, the creation of the Federal Reserve system and the Federal Trade Commission, the abolishment of child labor, the enactment of the eight-hour workday, and the imposition of a modest income tax.

Regardless of Wilson's principled goals with respect to domestic affairs, it would be his administration's foreign policy that commanded the most attention. His efforts to maintain the "Open Door" in China and to improve relations with Latin America were favorably received, but soon became overshadowed by an unfortunate intervention in Mexico and then ultimately by war in Europe.

Wilson's initial reaction to the outbreak of World War I in August 1914 was to secure domestic support for official American neutrality, pleading with American citizens to be "impartial in thought as well as in action." Neutrality, however, became less palatable to Americans as the war progressed. In 1915, German U-boats sank the ocean-liner Lusitania, killing 128 Americans, and in 1916 it was revealed that Germany had invited Mexico to join in an alliance against the United States. When Germany announced that it would resume unrestricted submarine warfare in January 1917, President Wilson felt the appropriate time had come for America to weigh in on the side of the Allies. Despite having campaigned on a peace platform in 1916, Wilson asked the Congress for a declaration of war and they obliged him.

Less than a year after having committed American troops to the First World War, however, Wilson's thoughts began to turn to the postwar order, and he enunciated his views on this topic in the famous Fourteen Points Address of January 1918. Wilson laid out his vision for a cleaner, more open, and ultimately more peaceful international system in this speech, and with Germany's collapse in November, Wilson eagerly steamed to France to insure that his program found inclusion in the instrument of peace to be drafted at Versailles. Despite a raucous welcome on the continent, however, Wilson was unable to override the desire of Britain, France, and Italy to punish Germany, and he was compelled to surrender thirteen of his points in exchange for realization of the one that he held most dear -- the League of Nations.

Wilson's small victory, however, was overshadowed by his inability to persuade the United States Senate to ratify the Treaty of Versailles, and hence to join the league. Wilson had submitted the treaty to the Senate in July of 1919, and the question of its ratification quickly evolved into a war of personalities between the president and his arch nemesis, Senator Henry Cabot Lodge of Massachusetts. Wilson staked all his personal prestige on the Senate's acceptance of the treaty, and when the Senate twice rejected the Versailles agreement, it became clear that President Wilson had lost the influence in Congress that had marked the beginning of his administration. Disabled by a series of strokes and confined to the White House for medical reasons, the energy of the early Wilson years had clearly gone. Nonetheless, Wilson remained mentally and physically acute enough to muster a controversial decision when he felt it necessary, as when he vetoed the Volstead Act that sought to enforce national prohibition of alcohol.

Wilson had a great influence on both Roosevelts. FDR served as his assistant secretary of the navy and carefully observed the harsh lessons Wilson's campaign for the League of Nations exacted on his presidency. ER embraced Wilson's commitment to progressive reform, his passionate commitment to the League of Nations and closely observed the scathing treatment Edith Wilson received from the press when the first lady did not conceal her influence within the administration.