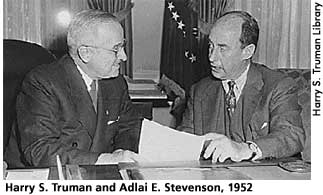 Adlai Ewing Stevenson, Illinois governor (1948-1952), two-time Democratic presidential nominee (1952, 1956), United States ambassador to the United Nations (1961-1965), and close personal and political friend of Eleanor Roosevelt, was born February 5, 1900 in Los Angeles, California. The leading Democratic figure of the 1950s, Stevenson was known for his wit, intellectual speeches, and liberal political convictions. For many Americans in the mid-twentieth century, he symbolized conscience in politics.

A grandson and namesake of Grover Cleveland's vice-president, Stevenson was raised in Illinois where his parents' families had long been prominent politically, economically, and socially. After graduating from Princeton University and Northwestern University School of Law, he practiced law in Chicago. During World War II, he was special assistant to the secretary of the navy. In 1945 he went to the state department where he helped organize the United Nations and served as an advisor to its first American delegation, including Eleanor Roosevelt. The two became good friends. Stevenson, with ER's blessings, resigned from the delegation staff and returned to Illinois to run for governor of Illinois in 1948 on a platform of good government and opposition to the "Green Machine," the corrupt administration of Republican incumbent, Dwight H. Green. Stevenson's substantial victory (he won by a margin of 570,000 votes while President Harry Truman carried Illinois by only 34,000) made him a national figure and led to his nomination as the Democratic candidate for president in 1952.

In 1952, the Democrats drafted Stevenson to be their presidential standard bearer. He campaigned on a continuation of Franklin Roosevelt's New Deal and Harry Truman's Fair Deal; however, he could not make a dent in Republican candidate Dwight Eisenhower's popularity or match his pledge to go to Korea. Stevenson lost the election by a wide margin.

Stevenson challenged Eisenhower again in 1956, arguing that the president's policies ignored or inadequately handled such issues as nuclear testing in the atmosphere, reduction of East-West tensions, the end of the draft, and increased assistance to underdeveloped countries through the United Nations. Again, he lost decisively. In 1960, ER, who actively campaigned for Stevenson in 1952 and 1956 and who was concerned that no Democratic candidate had Stevenson's understanding of foreign affairs, urged him to run again. Against his wishes she also chaired the Draft Stevenson Campaign.

Stevenson's ambivalence about seeking the Democratic presidential nomination for a third time strained his friendship with ER and, as a result, their relationship was permanently altered. Nevertheless, they remained friendly and ER strongly supported his appointment to the UN ambassadorship in 1961.  When she died, Stevenson spoke at a memorial service held for her at the Cathedral of St. John the Divine in New York City and served as chair of the Eleanor Roosevelt Foundation.