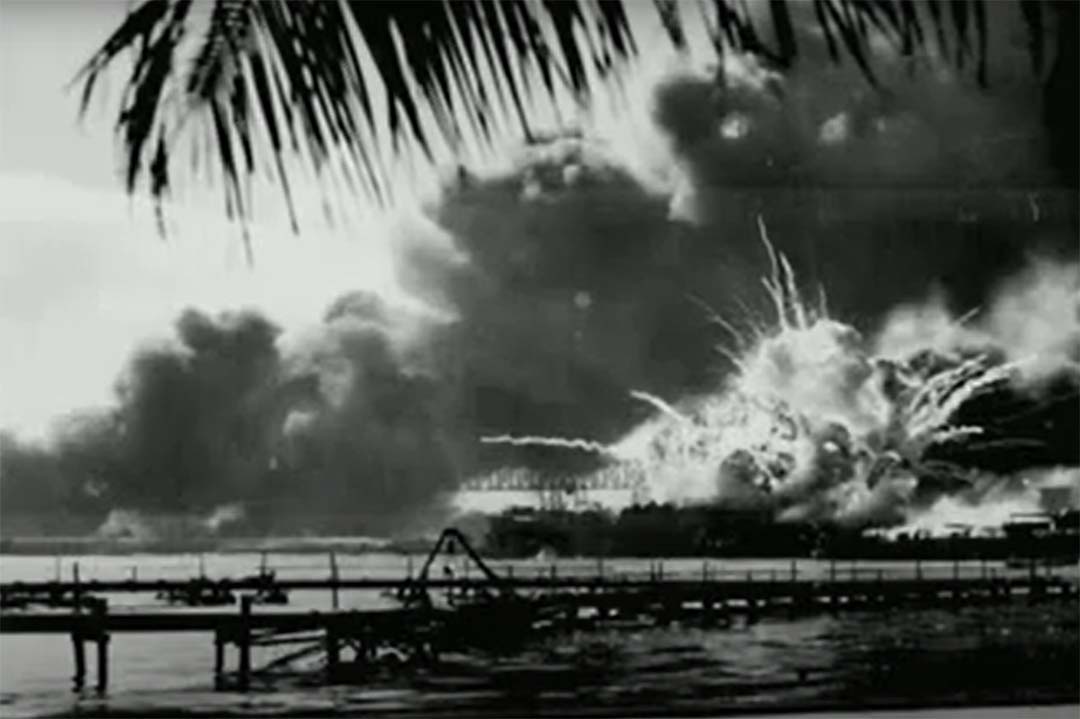 The Japanese air attack on Pearl Harbor (on the Hawaiian island of Oahu), on December 7, 1941, was the climax of ten years of rising tension between Japan and the United States. Throughout the 1930s, Japan had been steadily encroaching on China, and the U.S. had been trying to contain Japan’s expansion. Since the U.S. supplied more than half of Japan’s iron, steel, and oil, Japan was reluctant to push the U.S. too far, but it was also intent on getting control of its own sources of raw materials.” In late September 1940 “Japan joined an alliance with Germany and Italy and began to expand into northern Indochina.” In response the U.S. “placed an embargo on aviation fuel, scrap metal, steel, and iron. After Japan seized the rest of Indochina in July 1941, President Roosevelt closed the Panama Canal to Japanese shipping and added oil to the embargo list. In October General Tojo, leader of the Japanese pro-war party, became premier.” Negotiations went on in Washington, though “both sides seem to have believed war was inevitable.” In late November Japan sent aircraft carriers east toward Hawaii and massed troops on the Malayan border. “American military leaders, expecting a Japanese attack on Malaya, gave only general warnings to U.S. forces in Pearl Harbor” – where commanders “took few precautions; there was no effective air patrol, and neither ships nor planes were safely dispersed.” “Japanese planes attacked Pearl Harbor at 7:55 A.M., December 7; a second wave hit an hour later. By the time the planes returned to their carriers at 9:45, most of the American planes on Oahu were wrecked; eight battleships, three destroyers, and three cruisers were put out of action; and two battleships were totally destroyed.” “A total of 2,323 U.S. servicemen were killed. The next day President Roosevelt spoke to a joint session of 2 Congress and proclaimed December 7 as a ‘date which will live in infamy.’ With only one dissent, Congress granted Roosevelt’s request to recognize that a state of war existed between the U.S. and Japan. With that vote America entered World War II.” Source: The Reader’s Companion to American History, Eric Foner and John A. Garraty, eds. Boston: Houghton Mifflin Company, 1991, page 827.

Specific Context of the Source

Eleanor Roosevelt had a career on radio that began in the 1920s and expanded while Franklin Roosevelt was president. She had commercial sponsors but gave the money she earned at this time to charity, such as the American Friends Service Committee. Speaking in a personal, conversational style, with a high pitched voice and clear, upperclass East Coast diction, ER delivered listeners for her sponsors and proved that she was worth large sums to advertisers. She was especially interested in the participation of women in civic life and issues of education and youth. Between 1933 and 1945 Eleanor Roosevelt’s White House broadcasts addressed the challenges that depression and war posed as well as lighter topics and commentary. After 1945 ER continued her radio broadcasts with a focus on human rights, the Cold War, and world peace. Beginning in October 1941 ER gave 26 Sunday evening broadcasts sponsored by the Pan-American Coffee Bureau (eight Latin American coffee growing nations), and earned a total of $28,000. Through these broadcasts she helped to ready the American people for war. On the fateful Sunday, December 7, she changed her prepared remarks to rally her listeners behind the administration as the country entered the war. Source: Eleanor Roosevelt and the Media: A Public Quest for Self-Fulfillment, Maurine H. Beasley. Urbana: University of Illinois Press, 1987.

Analysis of the Source: Based on the radio broadcast itself, without added images, examples of what students might notice include: ER’s choice of words – a lot of focus on “we,” on ordinary people; our government is now acting and planning but we the people must rise to deal with this disaster that has struck; ER speaks particularly to women, especially as mothers, and acknowledges the fear and anxiety they – and she as a mother – face. She also speaks to young people who will face both opportunity and challenge. This broadcast is moving, comforting, and inspiring: “we are the free and unconquerable people of the United States of America” “I feel as though I were standing upon a rock and that rock is my faith in my fellow citizens.” Focusing on the images that have been added to the broadcast, students might notice: the scenes of enormous destruction at Pearl Harbor; the photo of President Roosevelt with advisors; the importance of radio to the many American families hearing this momentous news; the serious expressions on their faces; the varied civilian and military “daily business” of Americans, such as the grocery store window; the photo of Eleanor Roosevelt meeting with young Japanese Americans; the Roosevelt’s son James in uniform; and the focus on women and young people as essential to this war effort. 3 Examples of questions that students might have include: what were the circumstances surrounding this broadcast by ER (how, when, and where)? Why did she choose to do this? Did ER achieve her goal? What were the details surrounding the attack on Pearl Harbor?

1. Have students listen to the ER broadcast first, with a copy of the printed version to follow along, but without the images. Direct them to work in pairs to jot down what they notice, list any questions that come to mind, and write what they know (or think they know) about the historical context surrounding this event.

2. Then play the video so that students listen a second time, watch the images, and add to what they have written.

3. Next reconvene students as a whole class and ask them to share what they noticed, their questions, and what they have on the context.

4. Use the information provided above in the historical background (about the attack on Pearl Harbor), the specific content of the source (about ER’s radio broadcasts), and the analysis of the source to expand on, clarify, and supplement what students observed, answer questions they posed, and raise key points and issues that students may have missed.

5. As an assessment activity assign students to write a journal or diary entry as if they were young people who had just listened to this broadcast at home with their families on the evening of Sunday, December 7, 1941. Direct students to select evidence from the broadcast and the images as well as the historical background to support and explain the feelings, thoughts, concerns, and questions that they might have had in this experience. Then ask students to share their journal/diary entry with one or two other students.

6. Last reconvene students as a whole class and provide an opportunity for them to make connections between this experience and events in our contemporary world, such as this country’s response to the September 11, 2001, the coronavirus pandemic, or similar situations that called for national action.