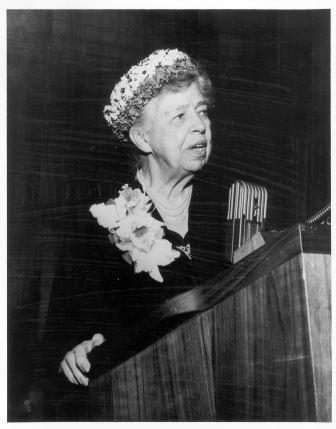 If I Were a Republican Today

In this country we believe in a two party system, but in the past few years it has sometimes, it seems to me, however difficult to form a clear-cut idea of what the two political parties actually represent. I believe it is important to always have a strong opposition party no matter which party is in power and that is why the issues should be clear.

Senator Wiley of Wisconsin, a short time ago on my television program, read me the new Republican Party platform, and I could not help thinking that it had some curiously reminiscent planks that might almost have made their first appearance in the New Deal. The Republicans say they are for a reduction in taxes but they are not for a reduction in any of the services rendered the people! The services are all to be met by more economical administration of government. That, of course, is always the slogan of the party out of power because it is not in the position of administering these agencies of government and when you are not actually doing the job, it is always easier to say it could be done more economically but the history of the Republican Party is not the history of retrenchment in government personnel or expenditure.

It is true that services to the people usually have been started in Democratic Administrations and then adopted and continued in Republican platforms.

It is true that the cost of government goes up with these services. However, I do not think it will be proved by close scrutiny of our past history that the Republicans employ any fewer Republicans than the Democrats employ Democrats in political places.

If I were a Republican today I think I would ask my Party to take a clear-cut stand. At present it is not clear cut. They say, for instance, they are against the Administration's health bill because it is "socialized medicine," but they acknowledge that we need more medical care throughout the country, and so they are vaguely for better medical care without specifying exactly how it is to be accomplished. They are for freedom as against Socialism, but no one in the Democratic Administration is a Socialist.

The Republicans believe in a bi-partisan foreign policy. They complain that the Administration has of late laid down the policy and consulted the Republicans after the policy was made and not before. They could, however, suggest machinery by which they took part in all this policy making either by returning to the former practice of legislative representation in the delegation for the United Nations General Assembly, or by some type of close coordination between the State Department and the Foreign Relations committees in both the Houses of Congress.

If I were a Republican I would want my party to formulate exactly what it stood for in foreign affairs and state why it was for certain policies and against others, so that it would not be quite so difficult for the general public to understand just what the Republican stand on foreign policy actually is. Their program as recently stated is curiously evasive. I would want my party to state what kind of peace policies it would pursue in contrast to those of the present Administration. I would want a clear cut statement on the defense of my country which is closely tied to the policy of peace. The present statement is in very general terms and it does not face the realities of the situation.

In the last campaign for the Presidency, the Republican candidate came out against certain types of farm aid. If I were a Republican I would want my party's stand on price support and handling of surplus crops, etc., very clearly stated. I would also want to know in unmistakable terms my Party's stand on conservation and development of natural resources, because in the place where we are today, the development of water power, the control of floods, and soil and forest conservation are of primary importance to the future of the people of the country.

Both Parties state we must have civil rights for all regardless "of race, religion, color or country of origin." When it comes to making these words effective in law, both Parties are divided and a coalition of Democrats and Republicans prevents any legislation from becoming law.

These are two basically different theories but today you can find people in both parties who believe in either one or the other theory. If I were a Republican, I think I would consider it important to have that point cleared up so that one could choose the philosophy one felt was the most sound. If we have reached a point in our economic development where it is clear to all of us that the interests of the top and the bottom are so closely tied that they must be mutually developed, then I think it would be well for either or both Parties to state that as a new policy.

As I read over the Republican political bible as it has just been issued, it seems to me that they have gone over the things which they think elected President Truman and they have accepted them all, saying: "Gentlemen we will do all of these things and more and we will reduce your taxes which will give you more money to spend as you wish." This may fool the voters but I do not think it will, and I, for one, would like both Parties to be clear and explicit in the philosophies that underlies whatever they do. Then one would not get out the confused vote and have the kind of participation by the voters which one saw in the last election in Great Britain. We never get as big a percentage of the vote out as they did, and that is largely I think because the policies of the two major Parties are at present so lacking in clarity that the people wait and make their final decision on the candidates and what each says in the campaign. Many people do not vote, because they honestly do not understand what the policies back of the oratory are and they decide that it will not matter much which party wins and therefore they stay away from the polls.