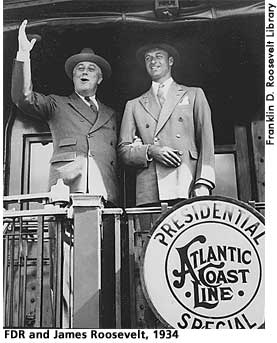 James Roosevelt, ("Jimmy") the second child and first son of Franklin and Eleanor Roosevelt, was, apart from his sister, Anna, the Roosevelt child most active in FDR's political career. He worked on FDR's 1932 presidential campaign and served officially and unofficially as his father's assistant. During his brief stint as a presidential secretary (1937-38) he served as liaison to FDR's "little cabinet" and at his father's direction coordinated the activities of twenty federal agencies. He also often appeared at FDR's side to help his father create the appearance of walking.

After graduating from Groton and Harvard, James was a partner in a Boston insurance company until 1937 when he joined Roosevelt's staff as presidential assistant to fill the void left by the death of Louis Howe. However, his tenure as a staff member, like ER's career with the Office of Civil Defense during the early days of World War II, was brief due to congressional charges of nepotism and criticism over his possible use of political connections to further his business interests. His relationships with other presidential aides were also strained and he was known as "the crown prince" and "assistant president." The stress was so great that James developed ulcers and in 1938 resigned. Thereafter, he worked as a Hollywood film executive until he joined the Marines in 1940.

When World War II ended in 1945, James returned to California where he established a branch of his Boston insurance firm and tried to launch a political career. He served as chairman of the California State Democratic Central Committee in 1946 and a Democratic national committeeman from 1948-52. Five years after losing to incumbent Earl Warren in the 1950 California governor's race, James was elected to Congress from California's 26th Congressional District. He served in Congress until 1965 when President Lyndon Johnson appointed him a delegate to the United Nations Economic and Social Council. He resigned that position the next year to become president of the International Overseas Services Management Company. Thereafter he returned to California, where he worked as a business consultant and wrote books about his family. Two, Affectionately, F.D.R. and My Parents were nonfiction accounts; the third, A Family Matter, was fiction. His last political activity occurred in 1972 when he was active in Democrats for Nixon.

James had four wives and six children. His relationship with ER was equally complicated, in part because of the interference of FDR's mother, Sara, in his upbringing and in part because of ER's resentment over the role James and his first wife, Betsey, played during FDR's first two terms. ER had opposed making James a presidential assistant because she feared the impact harsh congressional criticism would have on her son and because she did not want the Roosevelt children to receive preferential treatment. At the same time she was hurt when FDR deferred to Betsey's judgment in matters that she felt were within her purview as first lady.

Later, mother and son disagreed over political candidates. She supported Adlai Stevenson in 1956 and 1960 while he backed Estes Kefauver and John Kennedy. However, her support for James was so strong that she almost resigned from the United Nations in 1950 when Harry Truman refused to endorse his candidacy for governor of California. James died in 1991 of complications from a stroke.