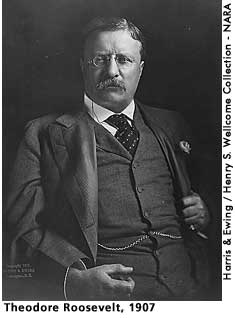 Theodore Roosevelt was the twenty-sixth president of the United States and Eleanor Roosevelt's uncle. He was also Franklin Roosevelt's fifth cousin and a political role model for both his younger relatives. FDR's political career followed the same trajectory as that of his famous Republican cousin, while Eleanor would embody and extend his progressive political values. So integral was TR's vision to his younger relatives that at least one historian has dubbed the twentieth century, "the Roosevelt century" in recognition of the trio's wide-ranging influence on American life and thought.

TR was born in 1858 to a socially prominent New York family. Asthmatic and nearsighted as a child, he was tutored at home until he was old enough to attend Harvard College. After graduating from Harvard, TR published a highly regarded book on the War of 1812 and briefly studied law at Columbia University. However his real passion, much to the horror of his family and friends, was politics. Beginning in 1880, TR served three years in the New York State Assembly where he quickly earned a reputation for political independence and social conscience. He left politics briefly when his first wife, Alice Hathaway Lee, died in 1884, but he returned two years later.

Thereafter, he held a succession of appointive and elective offices including the chairmanship of the U.S. Civil Service Commission (1889-1895) and the presidency of the New York City Police Board (1894 -1896). He also served briefly as assistant secretary of the navy (1897-1898), a position FDR would later hold. While serving as assistant secretary of the navy, TR agitated for war against Spain because of that country's treatment of Cuba, and when the Spanish American War broke out in 1898 he resigned to organize the First U.S. Volunteer Calvary Regiment. Roosevelt and his "Rough Riders" distinguished themselves at the battle of San Juan Hill and Roosevelt used the resulting publicity to jumpstart his race for the New York governorship in 1898.

As governor, TR supported many of the causes that ER would later champion, among them centralized, interventionist government, regulation of women's and children's labor, and taxes on utility and insurance interests. However, TR's progressive views did not endear him to conservative Republicans, who decided to sideline him by nominating him for vice-president in 1900. Their plan backfired when President William McKinley was assassinated in 1901 and TR replaced the fallen leader.

Like FDR, TR came to the presidency during a time of economic and political change. America was in the throes of industrialization and corporate monopolies were both powerful and unregulated. Europe was in the midst of an arms race as Germany and England vied with each other to see who could build the most modern fleet. Their rivalry was further exacerbated by the European countries' desire to colonize Africa and Asia. In the Far East, Japan was also flexing its military muscles and looking for territory to conquer.

Much as FDR did a generation later, TR met the challenges of his time with a combination of rhetoric and deft political action. Describing the presidency as "a bully pulpit" he used his position to crusade for reform at home and peace abroad.

Determined to give Americans what he called "a Square Deal"; i.e., a more just and equitable society, TR worked to increase the regulatory power of the federal government. He persuaded Congress to pass laws that strengthened the Interstate Commerce Commission and established a new federal Department of Labor and Commerce. Under his leadership, the federal government also brought forty-four suits against corporate monopolies. In addition, TR was instrumental in the passage of the Pure Food and Drug Act of 1906 and the Meat Inspection Act of 1906. Long concerned about the environment, he encouraged the Newlands Reclamation Act of 1902 to promote federal construction of dams to irrigate small farms and placed 230 million acres under federal protection. His record in race relations was less constructive. On the one hand he invited African American leader Booker T. Washington to dinner at the White House, but in 1906 approved the dishonorable discharges of three companies of black soldiers involved in the Brownsville, Texas, riot.

Describing his foreign policy as "speak softly but carry a big stick," TR maintained America's military strength (particularly that of the navy) while working assiduously for peace. While recognizing the need to maintain a balance of power abroad, he was also careful to make American interests his first priority. Convinced that the Atlantic and the Pacific Oceans needed to be linked by a U.S.-constructed canal, he aided and abetted Panama's revolt from Columbia in 1903 and actively supported the subsequent construction of the Panama Canal. He also added the Roosevelt Corollary to the Monroe Doctrine, the idea that the United States had both the right and the duty to intervene in the Western Hemisphere in the event of "chronic wrongdoing or an impotence which results in a general loosening of the ties of civilized society." In the Far East, however, he took a less imperialistic stance, supporting independence for the Philippines, (then an American protectorate) and mediating the Russo-Japanese War of 1905, an effort that earned him the Nobel Peace Prize in 1906.

After winning a second term in 1904, TR announced in 1905 that he would not seek another term on his own (he had previously filled out the three remaining years of McKinley's term). That decision would haunt him after his successor and friend William Howard Taft failed to live up to his expectations. Taft's turn away from progressive principles encouraged TR to try again for the presidency in 1912. Denied the Republican nomination, TR ran for president as the candidate of the Bull Moose Party, a loose collection of die-hard progressives that included ER's mentor, Jane Addams. TR polled 27 percent of the popular vote, enough to split the election for the Republicans and ensure the election of New Jersey Governor Woodrow Wilson. Inadvertently, he also boosted FDR's political career since Wilson appointed the younger Roosevelt assistant secretary of the navy.

Cast into the political wilderness, TR wrote his autobiography and traveled until World War I broke out in 1914. Disdaining Wilson's call for neutrality, TR campaigned assiduously for military preparedness. He also returned to the Republican fold, supporting the candidacy of Charles Evans Hughes in 1916. When the United States entered the war in 1917, he campaigned to raise another regiment but age, ill health, and Wilson's opposition foiled his plans. Thereafter, TR remained active in Republican politics and some historians think he would have been the party's candidate in 1920 had he lived. However, weakened by ill health and saddened by the death of his youngest son, Quentin, in World War I, Roosevelt died in his sleep in 1919.

Despite family tensions over her father's alcoholism and her later commitment to the Democratic party, TR's relationship with ER was affectionate. As a child, she was said to be more like him than his own children and her principled, moral approach to politics, as well as her commitment to public service, owed much to his example. ER and TR also shared many of the same progressive political concerns, including a strong central government committed to human welfare, government regulation of business and industry, and improved living conditions for all Americans. She incorporated many of his ideas into New Deal programs. ER, however, surpassed TR in her commitment to civil liberties, civil rights, human rights, and world peace, and she had a more expansive view of human and political relations than he did.