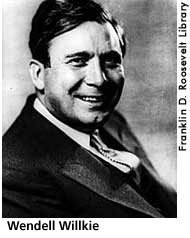 Wendell Willkie was born in Elwood, Indiana, on February 18, 1892. The Republican party tapped Willkie, a lawyer and utilities executive, to run against FDR in 1940, even though Willkie was a former Democrat. Willkie campaigned against the New Deal and the government's lack of military preparedness. During the election, Roosevelt preempted the military issue by expanding military contracts. Willkie then reversed his approach and accused FDR of warmongering. On election day, FDR received 27 million votes to Willkie's 22 million, and in the Electoral College, Roosevelt buried Willkie 449 to 82.

After failing to unseat Franklin D. Roosevelt in the 1940 presidential election, Willkie became one of FDR's most unlikely allies. To the chagrin of many in his party, Willkie called for greater national support for some of Roosevelt's controversial initiatives, such as the Lend-Lease Act, and embarked on a new campaign to awaken America from its isolationist slumber. On July 23, 1941, he urged unlimited aid to Britain in its struggle against Nazi Germany. That same year he traveled to Britain and the Middle East as FDR's personal representative and, in 1942, visited the USSR and China in the same capacity. In 1943, Willkie wrote One World, a plea for international peacekeeping after the war. Extremely popular, the book sold millions of copies and helped to bring the U.S. out of its isolationist slumber. Also in 1943, together with Eleanor Roosevelt and other Americans concerned about the mounting threats to peace and democracy, Willkie helped to establish Freedom House.

In 1944, Willkie once again sought the Republican presidential nomination, but his liberal progressive views gained little support due to the rightward shift of the Republican party. Willkie did not support the eventual 1944 Republican nominee, Thomas Dewey.

After surviving several heart attacks, Willkie finally succumbed, dying on October 8, 1944 at age fifty-two. ER in her October 12, 1944 "My Day" column eulogized Willkie as a "man of courage [whose] outspoken opinions on race relations were among his great contributions to the thinking of the world." She concluded, "Americans tend to forget the names of the men who lost their bid for the presidency. Willkie proved the exception to this rule."